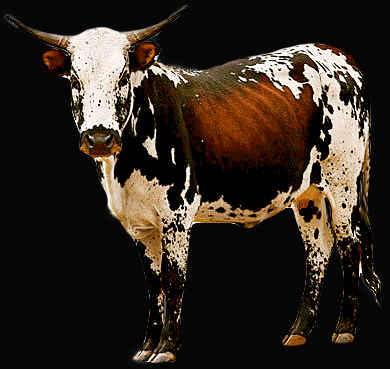 Nguni hides come in a diverse assortment of rich earthy colours and patterns with no two Nguni skins being the same, the main colours being black, brown and white.

Our Nguni hides are a bi-product of Nguni cattle farmed for beef in South Africa. All Nguni hides carry small scars and marks as a result of the cattle roaming freely in the bush, some hides also carry branding marks.

Nguni skins have become popular as floor rugs, not only for their natural beauty but also because they are incredibly hard wearing. Another reason for these African hides popularity is their ease of maintenance if they get dirty simply clean the affected area with ordinary sunlight soap and drape over a chair to dry in the shade. Similarly, if the edges curl, wet that area with water and place a heavy flat object on the area and leave overnight then allow to dry in the shade.

Hand made Nguni hide furniture is some of the most beautiful and uniquely African furniture available in South Africa which has become sought after in private homes and luxury lodges. The demand for this African furniture has increased dramatically with international buyers discovering the allure of the Nguni. Wingback chairs, lounge suites, ottomans and cushion covers are all upholstered in genuine Nguni hide.

Nguni cattle are indigenous to Southern Africa being first introduced to the area by the Xhosa, Swazi and Zulu people during their migration from the North between 600 - 700 AD. These medium-sized African cattle with an even temperament are highly prized for their fertility and resistance to disease. Throughout the ages, the well being of the cattle herds and the well being of African men have been so closely connected that the cattle have become part of the spiritual and aesthetic lives of these people. Not only did King Shaka recognize the economic importance of vast herds of cattle which they bread according to skin colour for each of his regiments in his army, but modern day Africans still determine their wealth by the number of cattle they own and pay Lobola (bridal price) for their wives, with the number of cattle paid being determined by the status of the bride to be.

Growing up in rural Africa it is custom for the young boys to look after the cattle herds during the day when they are taken out into the fields to feed. During these long hours, the young African herd boys have drawn similarities from their surroundings in the bush and given their cattle unique colourful names according to the cow's colours, patterns and shades.

isihlaalo - meaning 'saddle' which refers to cows that are black with a broad white strip over their back.

uNkwazi - comes from inkwazi (Fish Eagle) and refers to a cow with a black hide and a white head.

umngqithi - meaning a cow with light brown and white speckles similar to the Kori Bustard plant.

impemvu - meaning 'White Helmet Shrike' referring to the cow with a white face and coloured body.

ukhozi - meaning 'Black Eagle' is the name given to cows with white speckles on their stomach and forehead.

i(li)gamanxa - meaning 'do by halves' and refers to cows with white bodies and coloured neck and head.